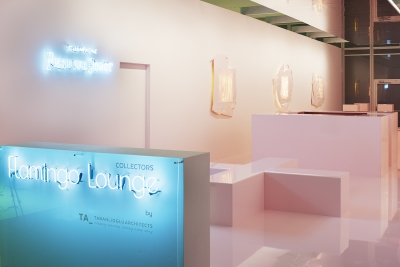 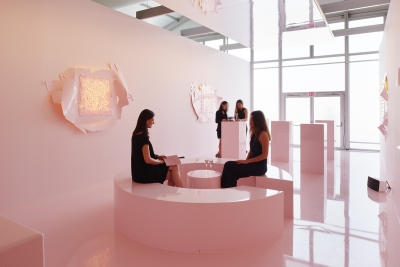 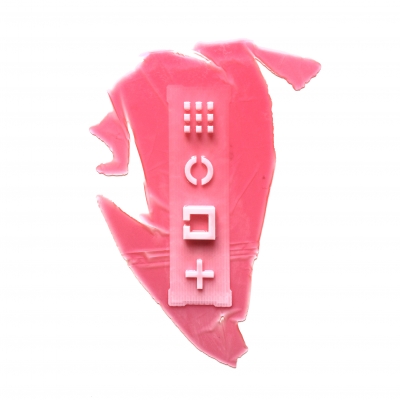 Deeply rooted in the modernist tradition of architectural making, Tabanlioglu Architects have evolved an approach to design that has specific interest in cultural, social, political and geographic data stripped of the their stylistic and decorative preconceptions. The hetereogenic nature of their practice is reflected in the Flamingo Lounge, which ranges from the colorful, ethereal and surreal liquidity of Gaetano Pesce, to the rigid utilitarian minimalism of Mies van der Rohe.The long linear space is broken down into programmatic zones, each represented by a piece of furniture / symbol. The cast monolithic elements are meant to evoke the feeling that the space is carved out of a single solid block with a texture and color representing Miami in a subconscious way. The pieces of furniture are stripped to their bare minimum, existing as abstract, primitive geometries. They attempt to function not only as utilitarian objects but also as symbols and archetypes that are a means of complex communication with multiple levels of meaning.

Istanbul-based office has a long family tradition and demonstrates a professionalism based on rigor and know-how. Out of many prestigious awards, Loft Gardens (2011) and Bodrum International Airport (2013) received RIBA International Award. The TA_project for the New National Stadium, Japan in 2012 was selected as one of the 11 finalists. Beyazit State Library has been awarded in the 2016 Edition of the American Architecture Prize. The first Pavilion of Turkey in the 14th International Venice Biennale Architecture Exhibition, 2014 and “Port City Talks. Istanbul. Antwerp.” exhibition at MAS Antwerp, for Europalia 2015 were curated by Murat Tabanlioglu. The installations for LDF 2015 and 2016 in London were designed by Tabanlioglu Architects as well.