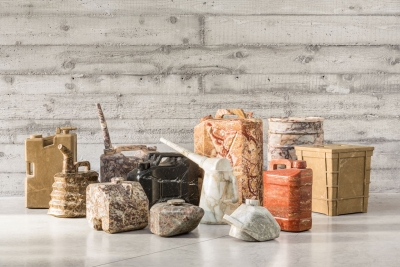 Plusdesign’s Streetscapes is a concept that revisits the initiatives taken by the gallery during the last two years. The intent is to create a promenade of peculiar installations throughout the booth.

The connection between M/M Paris, Colombian sound systems and the marble efforts of Will West resides in a deep involvement with street and urban landscapes. To translate these urban features into the domestic realm is Plusdesign’s Streetscapes aim.

The pieces presented are rethought as enclaves of a new domestic environment: the alluring qualities found on the streets of Cartagena’s carnival to the imaginary deserts of M/M Paris and Will West’s marble jugs.

Given the designers’ intention of dressing up conventional everyday functional objects with sculptural motifs, Plusdesign arranges the setting imagining how these elements build up what could be seen as a new domestic space.

In the entrance the visitors are welcomed by the Citronniers ou Laurier by M/M Paris, recalling lemon trees placed over carpets from the same designers. Behind them a series of sound systems appear: the 360 Sound PICO by Jonathan Nesci (specially produced for the fair), the PICO by Nathalie du Pasquier, and the Colombian PICOS Lo Maximo and Garnacha. At the end of the booth, marble jugs by the English Will West find their place.

With this layout, the Streetscapes of Plusdesign takes the visitor from utopian Parisian lemon trees, to Cartagena’s streets carnival and finally to the sculptural stone jugs that serve as their backdrop.